Did you know that the Simmons bed that you are sleeping on was made in Hawaii?

The Simmons company is one of the few manufacturing success stories in the state. As a market leader for mattresses in the islands, Simmons enjoys virtually 50% of the market share. The Honolulu factory is the smallest in the Simmons network, but has been recognized as contributing the highest EBITDA margins for Simmons.
– Simmons Operations in Hawaii

Recently, I had the opportunity to interview Lance Matsuda, Vice President and Strategic Account Manager for the Hawaii Region of the Simmons Bedding Company.

Taryn:  When did you open a factory in Hawaii and  is there one in every state?

Lance:  Simmons Bedding Company started in Hawaii in the 1950’s and is currently 1 of 18 US Plants including Puerto Rico.  Currently, Hawaii’s factory only manufactures mattresses and foundations.

Taryn:  Where is the Simmons factory located?

Lance:  We have been in our current plant in Kapolei since March 1993. At the time of our move, Kapolei was called Ewa Beach. Prior to that, we were located on Umi St. in Kalihi.

Taryn:  How many people does it employ and how big is the facility? Also, how many beds are manufactured in a week?

Lance:  We currently have 26 current employees in our 63,280-square-feet plant. On average, we manufacture 150 beds per week.

Taryn:  From start to finish, how long does it take to make a bed?

Lance:  Because there are stations involved we never really just make one bed. But we could put a mattress together in 30 minutes if we timed ourselves. 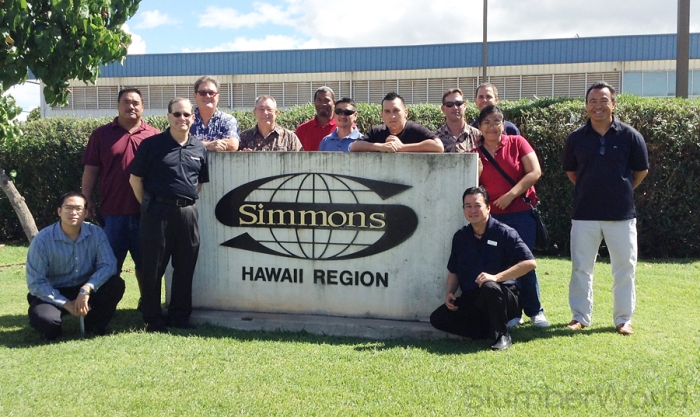 Do you own a Simmons mattress?  Or have you stopped by our showroom to test drive one?  I’d love to hear about what you think!

When not working as the Digital Media Specialist for C. S. Wo & Sons, Taryn, an avid foodie is always cooking and trying new recipes. Taryn lives with her husband, Kevin, and their cat, Keiko in Honolulu. Taryn is also a contributor on homeworldhawaii.com.

One thought on “Simmons: Made in Hawaii”